BUFFALO, NY– Top NY lobbying firm, O’Donnell & Associates is announcing the expansion of its government relations and campaign services with the addition of Alec Lewis, a key player in the New York Senate majority and campaign strategist with a proven record of success who will serve as the firm’s VP and Director of Campaigns. 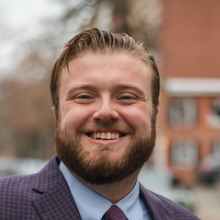 Lewis brings to O’Donnell & Associates varied and extensive government experience following a distinguished career as Deputy Director of Intergovernmental Affairs with the New York State Senate Democratic Conference, where he rose through the ranks beginning as an External Relations Associate and served in a variety of roles including as an Acting Chief of Staff to a State Senator, External Relations Legislative Director, and Upstate Regional Director.

Lewis represented the Conference across Upstate NY on critical topics such as transportation, housing, economic development, climate change, and homeland security while also overseeing a legislative team that provided messaging guidance along with essential session, committee, and budget support to over a dozen member offices.

“Alec’s expertise is a tremendous asset to our firm as we continue to grow,” says Jack O’Donnell, managing partner at O’Donnell and Associates. “He is well-versed on how Albany works and has the know-how to give our clients a competitive edge.”

“He is well-versed on how Albany works and has the know-how to give our clients a competitive edge.”

Lewis also served as the Statewide Field Director of the New York Democratic Senate Campaign Committee (DSCC) for the 2020 and 2022 election cycles where he was integral in creating the voter contact strategy that resulted in historic back-to-back Senate Supermajorities.

As Statewide Field Director, he oversaw the largest canvassing, phone banking, and texting programs in the history of the state senate.

“After ten sessions, many campaign cycles, and hundreds of thousands of miles put on the Wrangler traversing New York State, I am excited for this new opportunity,” says Lewis. “I am ready to hit the ground running to help OD&A clients reach their business and political goals.”

“I am ready to hit the ground running to help OD&A clients reach their business and political goals.”

Lewis has been instrumental in key local political wins across the State, helping to elect NYC Councilmember Marjorie Velazquez in 2021, Monroe County Executive Adam Bello in 2019, and Dutchess County Comptroller Robin Lois in 2017.

About O’Donnell and Associates