The biggest news of the week in this country was the rail strike that wasn’t.  The consequences—and the brinkmanship—were drastic. The Biden Administration went in head first and the results are another incremental win for President Joe Biden, who has had a good couple of months. Biden also got to lean into his labor bona fides which is always good for an essential, and often swing, constituency.

It was less of a good week for House Democrats. First, an unverified report quoted Sen. Chuck Schumer saying House Democrats and Speaker of the House Nancy Pelosi are “in trouble” come November.  Leaks from a closed-door meeting of Democrats in the House offered an in-depth look at some of the issues facing the Democratic Congressional Campaign Committee (DCCC), including the “moderate” vs. “progressive” divide.

Members are expected to pay “dues” to the campaign committee which helps promote vulnerable Democratic candidates in races that could determine who keeps control of the House. The amount a member is expected to contribute is based on seniority, committee assignments, chairmanships, and a variety of other factors. High-profile committee assignments or a spot in leadership come with the expectation of higher DCCC contributions.

Ninety-eight members have paid less than half of their assigned goal with 40 members contributing zero including prominent, progressive Democrats such as Alexandria Ocasio-Cortez, Illhan Omar, and Rashida Tlaib (here’s the internal DCCC document) . The roughly 100 delinquent members do not include “frontlines”, or those deemed by the DCCC to need the cash they have raised for their own races.

According to their most recent FEC filing, the DCCC has raised over $252 million with $118 million of that still on hand. While that may seem like a sufficient amount, the committee has pre-booked tens of millions of dollars in TV ads in swing states and as the races become more competitive closer to the election, there will be no shortage of members asking for financial support.

Rep. Alexandria Ocasio-Cortez (NY-14) is one of the party’s largest fundraisers but, like Omar, has not given any of her $6 million to the DCCC. “It’s been kind of documented, but I try not to put grassroots money and commingle it with big money.” AOC also endorsed DCCC Chair Sean Patrick Maloney’s primary opponent.

Senate Democrats are also facing internal challenges and Senator Joe Manchin continues to be in the middle of it.  As we discussed last week, more than 70 House Democrats have signed onto a letter opposing a provision in the bill to fund the government which would reform the permitting process for large-scale energy projects. Bernie Sanders doubled down on his opposition and is willing to oppose funding the government over objections to Manchin’s proposal saying, “We’ve got to take a stand now and have the courage to say no to the fossil fuel industry.” Manchin estimated he needs the support of 20 GOP Senators, but has yet to talk with fellow West Virginia Senator Shelly Moore Capito who has a permitting reform proposal of her own.

In a move to shore up support, Senate Democrats have been sharing a document that outlines the proposal’s plans to allow at least 20 clean energy projects to be completed. Schumer is an advocate of Manchin’s plan and has publicly stated he intends for the provision to be included in the funding bill.

That issue underscores a much larger issue: funding the government.

Lawmakers are looking to pass a continuing resolution which would fund the government at current levels for an additional 10 weeks to avoid a government shutdown on October 1st. There is little appetite for a government shutdown, but there are still a number of provisions that have to be worked through. The White House has asked for $47 billion in Ukrainian military aid and funds for natural disasters, both of which have broad support. Some of the other asks, including COVID recovery funds and resources to deal with monkeypox, are less certain.

As is stands currently, the CR with Manchin’s permitting proposal seems to lack the necessary 60 votes in the Senate and 218 in the House despite Schumer’s intent to move forward with the proposal. If Schumer does indeed move forward with the proposal, the Senate will have to vote on CR first. If the measure is scrapped, the House could cast the first vote. House Majority Leader Steny Hoyer suggested lawmakers could be in the Capitol on October 1 to vote on a government funding bill.

Senate Democrats delayed a long-awaited vote on codifying marriage equality in the hopes that the bill will have a better chance of garnering Republican support after the midterms are over. Not everyone was on board with that approach. Massachusetts Senator Elizabeth Warren said, “We need to vote on equal marriage today. Every single member of Congress should be willing to go on the record. And if there are Republicans who don’t want to vote on that before the election, I assume it is because they are on the wrong side of history.”

The press and candidates have been focused on the gubernatorial campaign…even if it seems like the public has not.

The Hochul and Zeldin camps have still not come to an agreement on debates following the governor’s assertion last week that “it’s going to happen.”

Lee Zeldin released a hard-hitting campaign ad against Hochul that drew some criticism. The ad features graphic clips of violent crime, blames Hochul, and tells voters to “vote like their lives depend on it.” Aside from the graphic violence, Zeldin was criticized for using clips from before Hochul’s time as governor and one from California.

Governor Hochul released new campaign ads of her own this week, painting Zeldin as “extreme.” The ads reference January 6th, Zeldin’s stance on the Dobbs decision, gun violence, and his ties to Trump before ending with “Lee Zeldin is extreme and dangerous.” Hochul is facing some criticism as well following a report that New York paid 45% more for the same COVID-19 test kits than California did. The third-party broker who won the emergency state contract is a donor to Hochul’s campaign. Her administration has denied any wrongdoing, offering that Digital Gadgets, the third-party broker, was the only supplier who could meet New York’s needs before schools reopened on January 3rd.

New York State Attorney General Tish James reportedly may sue Donald Trump after rejecting a settlement offer from Trump’s attorneys in an attempt to resolve the civil investigation into the Trump Organization. A lawsuit from James could deal a serious blow to the former president’s business operation which has already taken a hit since he left office.

Where do New York and DC collide? At the University of Buffalo. UB is a global leader in sustainability research and education which made it the perfect venue to host Vice President Kamala Harris and Deputy Secretary for Energy David Turk. The VP spoke about the Inflation Reduction Act, declaring: “The work that is happening here is very exciting and really a model for our country.”

Finally, if you were not in the 4.4 miles long queue with an expected 11-hour waiting time to pay your final respects to the Queen, here is a good look inside the room. One note of caution, if you are headed to today’s funeral, do not bring your dog. 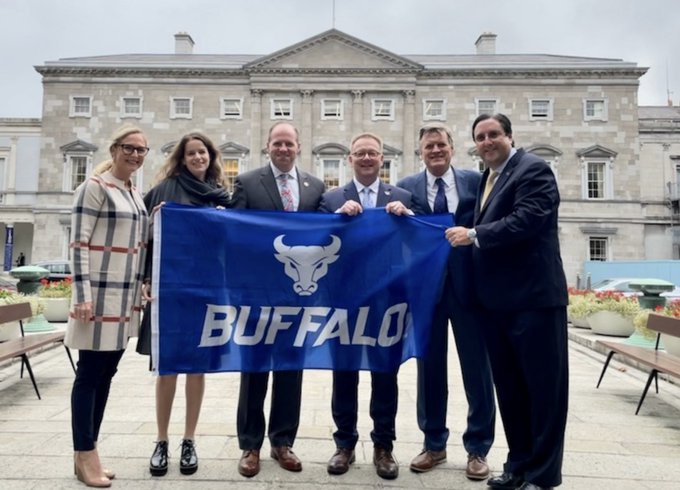 Our colleagues from the Poetry Collection proudly representing #UBuffalo in Dublin, Ireland with special guests, including OD&A’s Jack O’Donnell. More on the University at Buffalo’s James Joyce Collection here.

When are Shake Shack, Chick-fil-A Opening on NYS Thruway? Here’s an Update on Rest Stop Renovations.

Curious travelers traversing Interstate 90 have plenty of questions as crews work hard to revamp — and in most cases, completely rebuild — the Thruway’s 27 aged service areas as part of a $450 million project. All but five of the rest stops are Upstate. [Read more.]

Which Toy Should Go Into The Hall Of Fame?

Which toy do you think is most worthy of joining icons such as LEGO, Monopoly, and the Rubik’s Cube in the National Toy Hall of Fame? Our client, The Strong National Museum of Play in Rochester wants to know which one you think best meets the criteria of icon-status, longevity, discovery, and innovation? Vote here.

Former Mayor Lovely Warren Dips a Toe Back into Politics

When Will Food Prices Come Down?

In House Fight for N.Y. Suburbs, Will Abortion Turn Tide for Democrats?

Bank Will 'Not Hesitate' to Raise Interest Rates After Pound's Fall

MAGA Is to Woke As Errol Flynn Is to Henry Fonda

For the First Time Since 1946, New York's Governor's Race Features Just Two Choices on the Ballot.

Chris Cuomo: Interviewing Brother on CNN was Conflict of Interest

Life as Sporty Spice: ‘I was Actively Discouraged From Having a Relationship’

Visualized: The World's Population at 8 Billion, by Country

What Can’t the Internet Handle in 2022? Apostrophes

Who Gets to Read Your Text Messages After You Die?

The True Story Behind ‘The Greatest Beer Run Ever’

Ghosts of New York’s Glamorous Past Haunt an Empty Pub

India Jackpot Winner Fed Up With Requests for Help

Honey, I Shrank the Bunches of Oats: ‘Family’ & ‘Giant’ Size Cereal Boxes are Getting Smaller