There are just over eight weeks until Election Day.

Governor Kathy Hochul and Republican Challenger Lee Zeldin debated . . . debates. Zeldin repeated his demand for a series of five forums. Hochul this week said, “This is my 14th election. I actually look forward to debates. It’s going to happen,” but has not fully committed to any specific time or place. A new Emerson poll showed Hochul with a commanding 11 point lead, putting it in line with other public surveys that have shown the Governor enjoying a double digit lead. One recent poll– from former Republican campaign staffer Robert Cahaly’s Trafalgar Group—is an outlier, showing Hochul with only a four point lead. The Trafalgar Group has recently released polls in several battleground races across the country and each of them showed Republicans polling higher in the Trafalgar Group survey compared to several other, nonpartisan public polls. Perhaps Trafalgar has picked up some trends that other pollsters have not found yet. Perhaps Trafalgar has a better turn out model than everyone else. Or perhaps they over sampled Republicans to get an answer they wanted. Obviously, polls are screen shots in time and do pick up different things depending on when they were in the field, but the best way to look at this is to average the various polling results and that still leaves Hochul with a strong lead heading into the final stretch.

Hochul also has a massive lead in fundraising and is putting that advantage to use with a $2 million ad buy airing across the State in Spanish and English both on TV and digital. Running out of options, Zeldin has turned to former President Donald Trump who last week headlined a fundraiser that was said to raise $1.5 million. Zeldin also tried to brush off criticism from Democrats that he is too close to Trump, saying, “there are people who are obsessed over this theory that the top three issues of New Yorkers are orange man bad, orange man bad, orange man bad.”

Back in Washington, D.C….

Congress returned last week with a lot of work to do on Fiscal Year 2023 Appropriations to avoid a government shutdown starting October 1. In the absence of a full funding deal, House and Senate leaders are coalescing around a stopgap funding measure to keep the government running through December 16th, punting the conversation past Election Day and setting up an interesting lame duck session. President Joe Biden requested $47.1 billion in emergency funds as part of his administration’s supplemental proposal. Senate Minority Leader Mitch McConnell did not express reservations on the date, but said a continuing resolution should be “as clean as possible.”

Complicating matters around a stopgap funding bill is an agreement to include energy “permitting reform” language in a continuing resolution that was critical in securing Senator Joe Manchin of West Virginia’s vote for the Inflation Reduction Act in August. The permitting reform language that Democratic Senate Majority Leader Chuck Schumer committed to inserting in a future package includes setting maximum review times for permitting reviews, including two year caps for major National Environmental Policy Act (NEPA) reviews and a one year cap for smaller projects—what Manchin says are critical reforms for future energy projects in West Virginia. Last Wednesday, Schumer said he plans to include the language in the current Continuing Resolution.

The agreement has set off a furor among progressives in the Senate and House, including Senator Bernie Sanders of Vermont and House Natural Resources Chair Rep. Raul Grijalva of Arizona. “We urge you to ensure that these provisions are kept out of a continuing resolution or any other must-pass legislation this year,” said Grijalva in a letter with seventy Democrats sent to House Speaker Nancy Pelosi and Majority Leader Steny Hoyer. Sanders slammed the agreement as “a huge giveaway to the fossil fuel industry” warning that it would undermine President Biden’s pledge to reduce carbon emissions by 50 percent by the year 2030.

We close this week by saying goodbye to Queen Elizabeth II. The longest reigning monarch Britain has ever known died last week at 96. Of course, not everyone was so charitable. In Dublin, football (soccer) fans reacted with a different take. 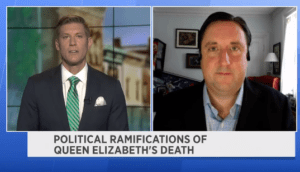 Jack O’Donnell, who worked as a researcher for a member of Parliament in 1994, joins Spectrum News 1 to discuss where Parliament stands now, what support will King Charles III receive, how much leeway will he be given by the new government and more. [Watch here.]

How Much Was The Queen Worth When She Died?

Given the opulence of Buckingham Palace, you might have expected Queen Elizabeth II to top the list of the world’s richest women. However, despite her royal lineage and lifestyle, she’s nowhere to be found. [Read more.]

Former first lady and Secretary of State and onetime Democratic presidential nominee Hillary Clinton says her chance to become president has passed. In an interview with CBS News, Clinton said she will never again run for the White House. [Read more.]

AG: What New Yorkers Should Know Amid 'Rise' in Mail Theft

The America Trap: Why Our Enemies Often Underestimate Us

Is George Santos the Only One Lying? We Checked.

In Michigan, Dem. Women are Rising. Now Some are Weighing a Senate Run.

RIP Regal Union Square, Another Awful Movie Theater That We All Loved to Hate