Good Morning from New York…
While election stories about 2020 have dominated the news, tomorrow is Election Day 2019! Tuesday’s slate has a number of hotly contested races worth watching. A number of races may serve as indicators (and possibly predictors) heading into next year’s state legislative races, especially contests for County Executive in Suffolk, Monroe, Dutchess, and Erie Counties. Tomorrow’s races are also the first test of New York’s early voting program. As of Friday, there were 177,025 early voters.

Here are the races that we will be following on Tuesday.

County Executive:
Suffolk County
Candidates: Steve Bellone (D), John Kennedy Jr. (R), Gregory John Fisher (Lib)
At the center of Suffolk County Executive’s race is the debate over the fiscal state of the County. Republican Comptroller John Kennedy Jr. has pointed to missteps throughout Bellone’s eight year tenure that have led to bond downgrades and hundreds of millions in accumulated date. Bellone, the incumbent County Executive, points to issues he inherited which have gotten progressively better throughout his tenure—citing that his 2020 budget will have no deficit.

Erie County
Candidates: Mark Poloncarz (D), Lynne Dixon (R)
Incumbent Erie County Executive Mark Poloncarz is seeking a third term against Independence candidate Lynne Dixon. Dixon is also on the Republican line. The race, which has been one of the nastiest and hardest fought of this election season, is down to the wire.  As the Wall Street Journal recently noted, many are watching this Erie County race to judge shifting voter sentiment ahead of next year’s presidential election.

Monroe County
Candidates: Cheryl Dinolfo (R), Adam Bello (D)
Republican Incumbent County Executive Cheryl DiNolfo is running against County Clerk Adam Bello. Bello and DiNolfo have spent a combined $1.2 Million on the race this year, an unprecedented sum in Monroe County. While Dinolfo is running as a Republican and Bello as a Democrat, the two actually faced off in a June primary for the right to run on the Independence Party line. Dinolfo claimed victory in that primary race by about 10 points, but Bello is the first Democrat to be endorsed by the Greater Rochester Chamber of Commerce. He also has strong support from organized labor.

Also on the ballot:

In the New York City Public Advocate Race  Jumaane Williams is likely to coast to victory against an underdog, who has ran a very entertaining campaign, Joe Borelli.

For more election coverage for tomorrow’s races around the State, click here.

In Washington D.C., the Senate passed its first fiscal 2020 spending package last Thursday. Lawmakers  have only weeks to prevent the second government shutdown of the year. Senators voted 84-9 on the approximately $332 billion spending package, which combined four domestic spending bills covering the departments of Agriculture; the Interior; Commerce and Justice (along with science-related spending), and Transportation and Housing and Urban Development. The vote means that the Senate has now passed four of the 12 fiscal 2020 spending bills, nearly a month after the fiscal year started. Congress now has until Nov. 21 to fund the government — either by passing each of the full-year bills or another continuing resolution (CR). Senators on both sides of the aisle are predicting that Congress will need to pass another CR next month given the snail’s pace of the 2020 funding bills. The House—who will be bogged down through the end of the year with impeachment proceedings—also needs to act.

The chairman of the New York State Democratic Party is pushing a proposal that would essentially neuter almost all third parties, crippling one of Gov. Andrew M. Cuomo’s biggest political nemeses but also potentially helping conservatives. The proposal from the chairman, Jay Jacobs, would quintuple the number of votes that a political party needs to guarantee a spot on the ballot in the next election. A party currently needs 50,000 votes for its candidate for governor to secure a spot for the next four years. Mr. Jacobs, in a private email to a group of state commissioners reviewing parts of New York election law, proposed raising the number to roughly 250,000.

Democrats have a real, albeit narrow, path to retake control of the U.S. Senate in 2020, fueled by strong fundraising totals in some key battleground states.

This is a favorable election cycle for Senate Democrats, with 23 Republican-held seats up in 2020, including four open seats, compared to 11 Democratic seats on the ballot. Nine of those Democrats are in states President Trump lost, and two in states he won: Michigan and Alabama. The only open seat on the Democratic side is in New Mexico, which Mr. Trump lost in 2016 and Democrats swept statewide in 2018.

If Democrats win the White House, they must gain three Senate seats to win back control of the Senate. If Mr. Trump wins re-election, Democrats must net four seats in order to overcome a tie-breaking vote by Vice President Mike Pence.

Ultimately, the fate of the Senate could ride on the president’s own campaign performance next year.

Two months after a fatal elevator accident in Manhattan, a state audit revealed that the Department of Buildings has not done elevator re-inspections.

The new audit from the Comptroller’s Office in Albany shows that the city isn’t doing all it could to improve elevator safety and comply with safety regulations concerning the more than 1 million buildings and construction sites in New York City. There are more than 70,000 elevators and related devices.

Thanks to Senate Health Chair, Gustavo Rivera, for touring the Jacobs School of Medicine at the University at Buffalo last week. (read Senator Rivera’s tweet.)

City & State has exclusively learned that the Black, Latino and Asian Caucus of the New York City Council will engage in a short, but robust, campaign against ranked choice. Councilman Daneek Miller, co-chair of the caucus, told City & State that the proposed change to city elections will hurt communities of color that have traditionally been powerful voting blocs – including the black community in Southeast Queens, an area he represents.

Voters in New York City have the opportunity to approve revisions to the City Charter, including adopting ranked-choice voting in primaries and special elections, through a series of ballot questions. It would allow candidates to vote for more than one candidate based on preference, rather than choosing one person outright.

Amtrak Aspires to a 2-hour D.C.-N.Y. Trip, But It’s Going to Take a Lot More than Faster Trains 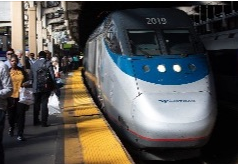 Amtrak’s new nonstop Acela service between Washington and New York was billed as the start of an era of faster and more efficient passenger service in the Northeast.

The service, launched in September, connects the nation’s two most powerful cities in two hours and 35 minutes, saving passengers about 15 minutes’ travel time. In 2021, the railroad plans to debut more Acela train sets, and it is in the midst of other cosmetic changes and upgrades.

Amtrak appears to be on a roll, with record ridership, faster Acela service and improved amenities for its customers. But its ambitions for the busy Northeast Corridor, including higher speeds, fewer delays, more trains and an eventual two-hour Washington-to-New York trip rest largely on its ability to raise billions needed for costly improvements to its aging and inadequate infrastructure.