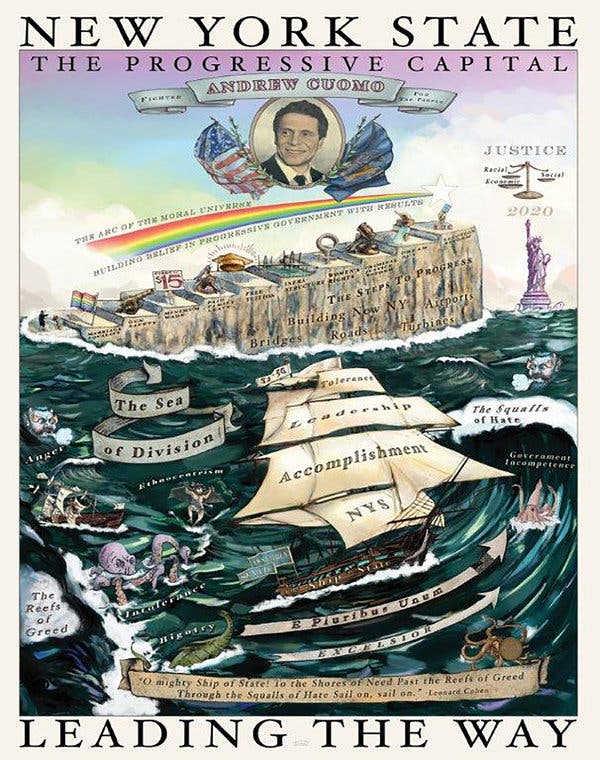 The 2020 Legislative Session kicked off last week with Governor Andrew Cuomo’s State of the State Address. Cuomo proposed a long list of policy proposals that, for the most part, held little surprises. The address included a $3 billion Mother Nature Bond Act, the legalization of adult use marijuana, regulating the ‘gig economy,’ a second offshore wind solicitation, and a poster (pictured, left) that caused some Capitol wags to wonder if the Governor’s team had begun partaking in the adult use marijuana a little early. For the full briefing book—click here.

The Executive Budget is due by next Tuesday, January 21st. Cuomo spent only a small part of his address discussing fiscal matters including a looming $6.1 billion deficit. What he did mention caused a great deal of dismay and consternation to county officials—Democratic and Republican—across New York. That is, Cuomo said that part of his plan to address the deficit is by requiring local governments to pay more for their share Medicaid costs. The details of Cuomo’s plan will not be clear until the Executive Budget comes out next week. Fellow Democrat Erie County Executive Mark Poloncarz—whose County’s cost to the State was specifically name checked in the Address—responded by saying: “Maybe that was their way of saying, ‘Hey, Mark, here’s what you get for leading the effort [to have the state cover increased Medicaid costs].” Moreover, counties in New York are on a calendar budget basis which means their 2020 budgets are complete. Any major increase would immediately throw those budgets out of balance. A change would also impact New York City, perhaps to the tune of $2 billion. Stay tuned for next Tuesday.

On the third floor of the Capitol, Legislators kicked off 2020 by passing a package of election law reforms. The bills included one to create a system of automatic voter registration when a person interacts with the state Department of Health and Department of Motor Vehicles; a bill that requires early voting polling stations to be located in population centers; and one requiring polling locations on the grounds of colleges and universities when they have 300 or more registered voters.

Perhaps the most controversial part of the floor debate on the election law package came as the Senate GOP proposed a hostile amendment to the Automatic Registration Bill to repeal the Criminal Justice Reform Laws passed by the Legislature last year that took effect January 1. Senate Minority Leader John Flanagan argued during floor debate,“I’m not sure I could find anything I could offer that would be more germane to the people we represent … than public safety.”  The discussion around changes to the controversial elimination of cash bail allowing judges across the State to use more discretion in the release of individuals charged with non-violent crimes have divided Speaker Heastie, Majority Leader Stewart-Cousins, the Governor, and even Mayor Bill de Blasio (whom it was rumored was disinvited from the Speaker’s Opening Day Reception in Albany because of his stance). The issue will be particularly thorny in a 2020 Election Year as it divides moderates (many of whom are facing challenges from the right) and progressives (many of whom are facing challenges from the left).

In Washington D.C., Speaker Nancy Pelosi (D-Calif.) on Friday ended weeks of speculation, announcing the House would vote as early as next week to send a pair of Articles of Impeachment to the Senate. The move is an indication that the Speaker, who had delayed the transmission of the articles in an effort to win procedural concessions from Senate GOP leaders, is ready to launch the trial in the upper chamber despite Senate Majority Leader Mitch McConnell’s (R-Ky.) refusal to accept her demands. Yet there are plenty of lingering questions about how the process will unfold over the next several weeks, as both sides vie for an upper hand in the high-stakes debate over the propriety of President Trump’s handling of foreign policy in Ukraine.

As he delivered his annual State of the State message to the Legislature on Wednesday, Governor Andrew Cuomo offered few specifics on how he would deal with the second-largest budget deficit of his ten years in office. Meanwhile, State Senator Joseph Addabbo, the chairman of the Senate Standing Committee on Racing, Gaming and Wagering, has a way to raise significant state revenue and he will renew his push to pass his mobile sports betting legislation. [Read more.]

Obama Campaign Guru: Trump Would Love to Run against Bernie

Barack Obama’s 2012 campaign manager is warning that Democrats would struggle in a general election against Donald Trump if Bernie Sanders is the nominee. In an interview with POLITICO, Jim Messina predicted that Trump would exploit Sanders’ stamp of socialism in battleground states needed to defeat Trump, keep control of the House and have a shot at winning the Senate. [Read more.]

Prince Harry and his wife, Meghan, failed to get clearance from Queen Elizabeth II before announcing their unorthodox plan to become part-time, financially independent royals and divide their time between Britain and North America. [Read more.]

Allies of President Trump are pursuing an effort to acquire right-leaning news channel One America News Network, according to people familiar with the matter, in a bid to shake up a conservative media market that has been dominated by Fox News. [Read more.]

Assembly Speaker Carl Heastie released a new slate of leadership posts for his conference on Tuesday.

The list for 2020 looks pretty similar to what it was last year, but there is some shuffling caused by Michele Titus’ (D-Queens) election to a judgeship in Queens.

Titus had been chair of the Governmental Operations Committee, a post that will now be occupied by Ken Zebrowski (D-Clarkstown). The Banks Committee, which had been chaired by Zebrowski, will now go to Tom Abinanti (D-Greenburgh), and the Oversight, Analysis and Investigation Committee went from Abinanti to John McDonald (D-Cohoes).

— Patricia Fahy (D-Albany) is the new vice chair of majority steering, a position formerly held by McDonald.
— Latrice Walker (D-Brooklyn) is the new chair of the Science & Technology Commission, a post previously occupied by Fahy.
— Aravella Simotas (D-Queens) is the new chair of Task Force on Women’s Issues, a job that had been held by Walker.
— Jo Anne Simon (D-Brooklyn) now chairs the Ethics and Guidance Committee, which was chaired by Simotas last year.

– by Bill Mahoney on Politico Pro