Good Morning from the War Room…

What we witnessed in Washington D.C. last week was horrible, haunting, and humiliating for all Americans.

In this catalogue of outrages, I am particularly struck by the flag of the Confederate States of America being proudly waved in front of a portrait of Sen. Charles Sumner. Sumner was attacked—and nearly killed—by a cane wielding Member of Congress after delivering a powerful speech against slavery, “The Crime Against Kansas.” There is much more to be said (and done) regarding what happened (and how and why as well as the House drafting Articles of Impeachment for President Donald J. Trump) but this week we want to focus more on the how government will impact our readers, your businesses, and your communities in 2021.

Democratic wins in both United States Senate races in Georgia races—both improbable and stunning–upended Washington’s power structure overnight, changing the landscape of what is possible in the incoming Biden Administration and handing unified control of Congress to Democrats. Democrats will have the opportunity to push major policy through with only a simple majority in the Senate—51 votes—through a process called budget reconciliation circumventing the opportunity for a filibuster (this parliamentary procedure was used to pass the Affordable Care Act). Biden—and Congressional Democrats—have begun work on an additional relief/stimulus bill the multiple trillions of dollar range (including those $2,000 stimulus checks). But while Democrats control both Houses for the first time since 2015, they have razor-thin majorities: a 50-50 tie in the Senate is broken by Vice President Kamala Harris, and in the House, Speaker Pelosi will have to traverse the smallest majority in decades—222-211. Whether or not leaders will be able to work through that gridlock remains to be seen. The change also paves the way for most of Biden’s Cabinet nominations to be approved without major delays.

For New York, most importantly, Democrats’ wins in Georgia means the first-ever United States Senate Majority Leader from our state: Senator Chuck Ellis Schumer. While Schumer will be battling for national Democratic priorities, at the end of every day, New York is and always has been at the center of the priorities for the Senator (who has visited all 62 counties in the State every year since he’s been elected). “I always fight for New York and always have,” Mr. Schumer said last week. “It’s just in my bones.” In addition to the obvious win for New York in increased funding opportunities (Schumer has always been one to bring home the bacon), Schumer’s ascension will give the State improved positioning on other important issues like the State and Local Tax (SALT) Cap. The O’Donnell & Associates team and many of our clients have seen that tenacity and grit up close and look forward to what the Senator’s ascension means for New York.

In political parlance, Schumer is now “in cycle” for 2022, so he will also have to manage political realities at home where progressives like Rep. Alexandria Ocasio-Cortez are driving the discussion increasingly leftward. Certain critics on the left have said that Democratic Leader has not done enough to advance priorities like the Green New Deal or Medicare for All (neither of which he has endorsed). There are progressive groups demanding Schumer prioritize their demands at the outset of the 117th Congress. Last month, members of the New York City chapter of the Democratic Socialists of America marched to his office to call on him to support a slate of progressive legislation, such as the Health Care Emergency Guarantee Act, a green jobs guarantee, and the Protecting the Right to Organize Act. How Schumer balances these demands on national policy with other priorities— like the need for almost $70 billion in to bridge budget gaps for local governments and the Metropolitan Transportation Authority (which needs $12 billion alone), will be something Schumer and his staff will have to grapple with starting day one.

Governor Cuomo’s State of the State Address is today at 11:30 AM. Watch it here.  While the bulk of proposals should come today, Cuomo’s team has also been discussing rolling the Governor’s agenda out further in a series of speeches addressing COVID-19 and vaccine distribution, as well as infrastructure and “building back better,” but as you know and have seen, that could change on a dime depending on the Governor’s inclination.  Thus far, he has announced proposals for recreational marijuana, mobile sports betting,  voting rights, strengthening domestic-violence law and tenant protections will be included in this year’s Executive Budget Proposal.
What else do we expect?

The Legislature convened the 2021 legislative session last Wednesday. Bill introductions continued at a

steady pace: almost 1,400 bills have been introduced in the Assembly, and almost 1,300 bills in the Senate.  However, the biggest news last week was announcements around Committee membership and Leadership: 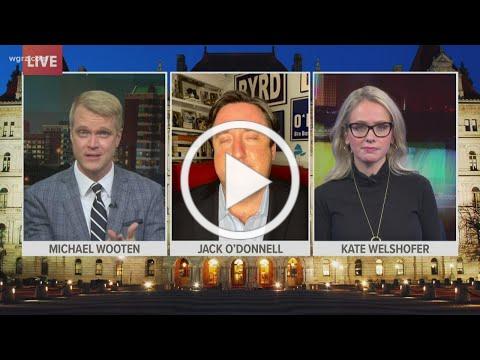 With his decision, Trump is poised to become the first U.S. president in modern political history to not appear for his successor’s swearing-in ceremony — one of the nation’s most prominent public displays of its commitment to a peaceful transfer of power. [Read more.]

Liberals to Breyer: Time to Retire

Democrats are on the cusp of enjoying the slimmest of Senate majorities. Progressive judicial activists want them to use it to ensure no more losses on the Supreme Court. [Read more.]

Nancy Mace was seen as a bright new star in the Republican Party, a potential leader of the new crop of freshman GOP women. But like many of her colleagues, Mace — once a loyal supporter of President Trump — was shaken to her core by the events at the Capitol on Wednesday. [Read more]

Last October, Assembly Member Jessica González-Rojas was elected to the New York State Assembly representing the 34th Assembly District, which includes the diverse Queens communities of Jackson Heights, East Elmhurst, Woodside and Corona. In June’s Democratic primary, she defeated Michael DenDekker who had held the seat for 12 years and was running for a seventh term in a wave of progressive primaries that will surely have a deep impact on policy in the Assembly this Session.

Prior to her run for Assembly, she was elected to the New York State Committee from 2002-2006. Through a leadership program at the National Association of Latino Elected and Appointed Officials (NALEO), she served as a community liaison in two district offices of Congresswoman Nydia M. Velázquez. For 13 years, Jessica served in leadership at the National Latina Institute for Reproductive Justice. She has been a leader in progressive movements for over two decades. Jessica successfully forges connections between reproductive health, gender, immigration, LGBTQ liberation, labor and Latinx civil rights, breaking down barriers between movements and building a strong Latina grassroots presence.

Widely considered a leader on progressive issues not just in Queens, she has held leadership roles in numerous local and national organizations that promote social justice advocacy. She has served on the Board of Directors of numerous progressive organizations such as New Immigrant Community Empowerment (NICE) and the New York City Transit Riders Council/Permanent Citizens Advisory Committee. She also has a regular presence in local and national media outlets, press relating to her advocacy has appeared in the New York Times, the Washington Post, El Diario/La Prensa, and MSNBC.

Jessica holds a master’s degree from the NYU Wagner School and a bachelor’s from Boston University. She was born in Queens and has lived in the community she represents for over two decades. She resides with her partner, Danny, and their young son who attends a local public school in Jackson Heights.