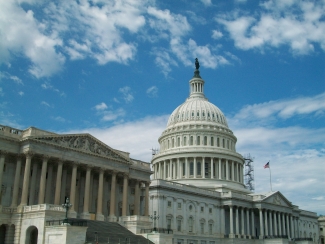 Good Morning from Beijing, where the race for Olympic medals is on.

In Washington, D.C., a different kind of competition was on the agenda. Last week, the House passed the America COMPETES Act—a $350 billion initiative to boost American competitiveness vis-a-vis China in supply chains and advanced manufacturing—along party lines. Republicans accused House Democrats of using the competitiveness bill as a way to pass unrelated spending proposals, weeks after the $2 trillion Build Back Better initiative crashed in the Senate. “It has become a Frankenstein monster of other things,” said Rep. Mike Gallagher (R., Wis.), citing climate-change spending originally tagged for the BBB.

Differences between the COMPETES Act and the Senate’s version of the bill, U.S. Innovation and Competition Act (USICA), which originally passed the Upper House in June, will now be reconciled by Conference Committee. An agreement would be a win for the Biden Administration headed into midterms. The White House stressed that time is of the essence. “I look forward to the House and Senate quickly coming together to find a path forward and putting a bill on my desk as soon as possible for my signature. America can’t afford to wait,” said Biden on Friday.

However, a note of caution on Democrats’ ability to get things done quickly in the Senate (beyond Competes/USCICA, they have Justice Stephen Breyer’s replacement on the table): last week, Senator Ben Ray Lujan of New Mexico, suffered a stroke, leaving Democrats without a majority in the Senate, at least temporarily—and until he returns, Democrats cannot accomplish anything without the help of Republicans. This makes the party line vote in the House on COMPETES (in contrast with the bipartisan 68-32 vote on USICA in June) more significant.

Senate Majority Leader Chuck Schumer and Minority Leader Mitch McConnell met last week to discuss the remainder of the work period (which runs through President’s Day), which Schumer called productive: “We talked about a number of issues. We’re going to try to make progress. We’ve got a lot of things we could do in a bipartisan way. And move the country forward. So we’re working on it.”

However, that agenda continues to be threatened by another potential government shutdown. Congress faces a February 18th deadline to come to an agreement on Fiscal Year 2022 funding to avert a government shutdown (worth noting they’ll now be talking FY 2022 & 2023 appropriations simultaneously). While Congress appears headed toward another stopgap funding measure, Democrats did receive an offer from the GOP for a meeting of the “four corners”—which includes House Democratic Appropriations Chair Rose DeLauro (D-Ct.), Republican Ranker Kay Granger (R-Tx.), as well as Senate Appropriations Chair Patrick Leahy (D-Vt.), and Ranker Richard Shelby (R-Al.)—regarding a larger funding deal. Asked if Democrats had sent an offer back to Republicans, Shelby said, “Not formally back, but they’re talking, we’re talking, and that’s healthy.”

Back in New York State…

This week was all about redistricting. On Thursday, Governor Kathy Hochul signed new congressional and state legislative maps into law after a week of yelling and screaming by Republicans. Democrats drew the new maps over fierce Republican opposition (and after the failure of the new Independent Redistricting Commission). State Senate Majority Leader Andrea Stewart-Cousins (D-Yonkers) said that Democrats in Albany had done a “service to the people of New York by actually reflecting where the population growth is.” While Republican Senate Minority Leader Rob Ortt said that Democrats are “only concerned with holding onto their political power.” It was the first time Democrats drew the lines in over 100 years and many independent observers noted the significant changes in the Senate map are simply corrections of the impressive job Republicans had done on those lines for the last few decades. The Congressional map also provides the potential of significant gains for Democrats which, along with some decisions in other states, have some analysts calling Democrats winners on redistricting, significant in a closely divided body.

Check out our podcasts on the NYS Budget. Listen to:
“From the Lobby with Jack O’Donnell”

Last week, New York City observed the second funeral for a fallen NYPD Officer in two weeks, laying to rest Officer Wilbert Mora. Mayor Adams doubled down on his comments last week, saying “Our city is going to do more than thank you. We are going to give you the resources to fight this senseless violence,” and repeating a line he first said of the January 21st attack: “it is New Yorkers against the killers and we will not lose. We will protect our city.” The biggest news came as embattled Manhattan District Attorney Alvin Bragg walked back a pair of controversial policies in a memo Friday, calling for commercial robberies committed with knives to once again be prosecuted as felonies.

We leave you with some motivational words from Prime Minister Boris Johnson to his remaining staff as he fights for his premiership amidst “Partygate:” “As Rafiki in ‘The Lion King’ says, change is good, and change is necessary even though it’s tough.”

Hochul Says She Won’t Raise Taxes on Wealthy, Asks Them to Remain in New York

Last year, the state legislature voted to raise taxes on the wealthy. That led to concerns New York could lose part of its tax base if people flee to lesser-taxed states. New York’s budget relies heavily on those top earners. [Read more.]

How Much Have You Learned About Black History?

The Albright-Knox Art Gallery is seeking more funding from the state – at least $15 million – to complete its two-year expansion project. That’s not a trivial sum, but Western New York will be the worse for it if the project stalls at the finish line. [Read more.]