President Joe Biden signed stopgap legislation to avert a government shutdown just hours ahead of a midnight deadline Friday. Congress passed the bill in both Houses Thursday evening after party leaders brokered a deal to overcome GOP brinkmanship and threats regarding Federal vaccine mandates. The final tally in the Senate was 69-28 and the House was 221-212. The bill continues Federal spending through February 18th, at which point lawmakers will have to either pass another short term patch or come to an agreement on full Fiscal Year 2022 Appropriations.

Attention in Washington now turns to the debt limit. Last week, a beltway think tank—the Bipartisan Policy Center—projected the “X date” when the United States will be unable to meet its debt obligations will be somewhere between December 21-January 28, and urged Congress to take action before the holiday recess. “Those who believe the debt limit can safely be pushed to the back of the December legislative pileup are misinformed. Congress would be flirting with financial disaster if it leaves for the holiday recess without addressing the debt limit,” said Shai Akabas, BPC Director of Economic Policy. Despite on-going talks, Senate Majority Leader Chuck Schumer and Minority Leader Mitch McConnell have yet to announce an agreement (or even show tangible progress, really). House Leaders rejected efforts to tie the debt limit to the Defense Authorization Bill for fears it would sink any possibility of passing the bill in the lower Chamber. “We’re not discussing it over here. We don’t think it’s the best option because we’re not sure we can do it. We’ve told the Senate that. That’s the reality. Those are the numbers,” said House Majority Leader Steny Hoyer.

The National Defense Authorization Act—the must-pass bill that sets the policy agenda for the Pentagon each year and authorizes $780 billion to put that plan into action—remains stalled in the Senate. The Upper Chamber remains bitterly divided on Senator Marco Rubio (R-FL)’s amendment to punish China over its alleged treatment of the Uyghurs. Bipartisan senators finally appeared to reach an agreement on a package of 25 amendments late last Wednesday, but Rubio is blocking moving forward until the inclusion of his amendment, which would place more import restrictions on Chinese goods manufactured by Uyghur Muslims in the Xinjiang province of China who are in forced labor camps.

On the highest stakes piece of legislation with implications across the board for midterms, the Build Back Better Act, it was a quiet week. President Biden held calls with Senators Tim Kaine and Patty Murray urging its passage in the Senate. However, it is becoming increasingly clear that Build Back Better will not be moved to the top of the list until the Senate passes the NDAA and a Debt Limit increase, making the pre-holiday recess window to negotiating the almost $2 billion reconciliation bill extraordinarily tight.

United States Representative Tom Suozzi, a Democrat from Long Island, announced last Monday that he would enter the race for Governor, broadening the field of candidates running. Suozzi expects to be strong with moderate suburban voters but will need to raise his name recognition and broaden his appeal to be a factor. Suozzi has been vocal in his criticism of Progressives and the far left, certainly at least a vocal constituency in a Democratic primary. Furthermore, Suozzi has taken aim at specific progressive policies like bail reform.

Attorney General Tish James picked up a key endorsement with Westchester County Executive George Latimer, Deputy County Executive Ken Jenkins, and twelve Democrats on the County Legislature coming out in support of her candidacy for Governor. “It was a month ago today that voters went to the polls across the state and nation, and the media reported about a Republican red tide. But here in Westchester that was a false narrative and we had democratic successes and pushed back against the red tide. We are here to endorse Tish James for Governor because she can bridge the gap of rural, urban, and suburban New Yorkers and offer a message of change that can unite us as Democrats,” said Latimer. Hochul also announced endorsements from suburban officials: Assemblywoman Amy Paulin, Assemblyman Nader Sayegh, Assemblyman Steve Otis, Assemblyman Chris Burdick, Assemblywoman Sandy Galef and Assemblyman Ken Zebrowski and Yonkers Mayor Mike Spano.

On Thursday, Governor Hochul appeared with her new Health Commissioner, Dr. Mary Bassett, on her first official day on the job. Bassett—a former New York City Health Commissioner—has been the Governor’s most high-profile new appointment to date and will be tasked with righting the troubled Department of Health and promoting policies that put “people over dollars.” In her remarks, Bassett pledged to be honest with the public, in clear contrast with her predecessor Dr. Howard Zucker. “I’ve learned the importance of truth-telling. I’ll tell the governor what we know, what we don’t know and what our best judgment is and I’ll tell the public the same thing,” said Bassett.

Finally, the release of further videos and transcripts from AG James’ investigation of former governor Cuomo has brought down another Cuomo. Chris Cuomo was fired from his anchor job at CNN for helping his brother deal with his sexual harassment scandal, and is now facing a sexual misconduct allegation of his own. Here are a few other bombshell revelations as a result of the AG’s probe:

After much dithering, CNN leadership finally did the right thing last week when it put its star anchor Chris Cuomo on an indefinite suspension from the network. There was no other choice consistent with even a modicum of journalistic standards after the NY state attorney general released thousands of pages of evidence related to the investigation of sexual misconduct charges by 11 women against former governor Andrew Cuomo. [Read more.] 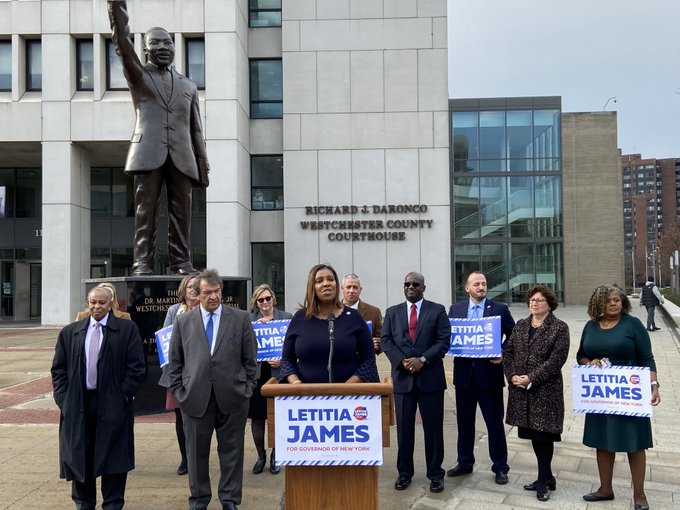 With New York’s top job up for grabs after Andrew Cuomo’s resignation, state elections coming up next year are shaping up as a high-stakes round of musical chairs — and attorney general is a coveted seat. And now the AG race is as crowded as the campaign to fill the Executive Mansion. [Read more.]

The Latest Threat to Upstate Journalism