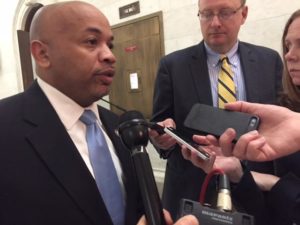 Speaker Carl Heastie declared that the Assembly Democratic Conference will look for “revenue raisers” rather than cuts in spending—specifically emphasizing the importance of healthcare (Medicaid spending is the primary driver of the current deficit). Heastie was also careful to point out that the Assembly Democrats are not looking at tax hikes . . . so what could some of those sources be?

While Heastie has made his Conference’s position on cuts to social services clear, there are some other areas that members  may consider:

What about going straight to the source? Well, that will be difficult. $4 billion of the $6.1 billion shortfall comes from Medicaid spending. The Division of Budget has been reviewing Medicaid with a fine tooth comb and cuts—or at least proposed cuts—are very likely across the State. Heastie’s comments repeatedly pointed to the importance of healthcare, and the Democratic Conference is likely to stand firm against any cuts that hurt social services of any sort. Buckle up.

While the fiscal situation in New York worsens, so does the situation in Washington, DC. Speaker Nancy Pelosi announced on Thursday that the House of Representatives would begin drafting Articles of Impeachment for President Trump. Democrat in the House are pushing ahead with a rapid timetable that could set the stage for a vote before Christmas.  That doesn’t leave much time for a budget agreement before the current stopgap spending measure runs out on December 20th.  Senate Appropriations Committee Chairman Richard Shelby (R-Ala.) (pictured, left) warned on Tuesday that budget negotiators need to reach an “understanding” on fiscal 2020 spending bills within days to avoid a shutdown (or another short term continuing resolution). While last week it looked like decision makers reached an agreement last week on the big picture—total numbers for each of the subcommittee allocations—and it was reported Treasury Secretary Steve Mnuchin and Speaker Pelosi would be working toward a deal, it appears the devil could be in the details. Stay tuned.

The exodus of Senate Republicans continues. And the race is on to replace the latest one to announce plans to walk away.

State Sen. Michael Ranzenhofer, an Amherst Republican, said Friday he will not seek re-election to the Senate 61st, a sprawling district that runs from the suburbs of Buffalo into Rochester.

Ranzenhofer joins a steady string of Senate Republicans – ousted from their majority status in the 2018 elections – to either leave or announce they will not seek re-election next year.

Sen. Betty Little, 79, of Queensbury, has represented the 45th Senate District, which is the geographically largest in the state and includes all or parts of Warren, Washington, Hamilton, Franklin, Essex and Clinton counties. After 17 years in the seat, she made announcements Thursday in Glens Falls and Plattsburgh that she won’t seek re-election for a tenth two-year term in 2020.

A British Test for the Populist Revolution

A country that likes to consider itself the most stable of democracies, a model of government typified by steady, pragmatic, get-things-done-with-no-drama progress, has descended in a few years into southern European-style political chaos.

Next Thursday, the British go to the polls in a nationwide vote for the fourth time in less than five years. The result could produce the U.K.’s fourth prime minister in a little over three years.

Defenders of President Trump often describe the impeachment inquiry as a “circus.” But after the partisan theatrics expected during Wednesday’s first hearing in the House Judiciary Committee, they might need a stronger word.

When Chairman Jerrold Nadler (D-N.Y.) gavels the room to order at 10 a.m., some of Capitol Hill’s most aggressive and colorful characters — Republicans and Democrats — will be seated on the dais, ready to inject new friction and hostility into the second phase of the inquiry.

Did an Ethics Commission Leak Private Information to Cuomo?

The text messages arrived on a snowy January afternoon, a few hours after New York’s state ethics commission privately debated whether to investigate a disgraced former aide to Gov. Andrew M. Cuomo. They were from a high-ranking government lawyer, sent to one of the commission members. Was the meeting over? the lawyer asked. He had a question. The conversation that followed is now at the heart of a brewing ethics controversy in Albany, involving an alleged leak, cover-up and pressure on supposedly independent investigative bodies.

A Friend to Everyone

As ‘Sesame Street’ turns 50 and accepts the Kennedy Center Honors, its lessons in niceness are still as easy as 1-2-3

How To Run for Congress

You’re watching the news, you’re talking to people, you’re annoyed at Congress. No, you’re furious at Congress, and you know you could do so much better in that job. Almost anyone can do it. But here are some pro tips, if you actually want to win.

The Myths of the “Genius” Behind Trump’s Reelection Campaign

Brad Parscale has said he’s taking a relative pittance to run the president’s reelection operation. But as with much of what Parscale has claimed about his work and life, that’s not the full story. This is.