The New York State Public Campaign Financing Commission—which was appointed earlier this year after Governor Cuomo and Legislative leaders failed to reach consensus on overhauling the state’s campaign finance system—held its final vote last Monday. The system proposed by the Commission drew harsh criticism from several legislators, nonetheless it will become law unless the Legislature acts by December 21st.  The Commission reduced contribution limits for statewide candidates from about $70,000 to $18,000 (still significantly above the $5,400 limit that presidential candidates can accept); candidates for State Senate can raise up to $10,000 from individuals, down from $19,300; and Assembly candidates can raise $6,000, down from $9,400. Notably, the commission did not address limits for party committees, which can raise as much as $117,300 from a single donor and then dole it out to candidates as they see fit.  However, what really drew the ire of critics was the Commission’s approval of a higher threshold for parties to obtain a ballot line, increasing it from 50,000 votes in a gubernatorial election to 130,000 votes every two years, and increased the ballot petition signature requirement for statewide candidates from 15,000 to 45,000. To many critics, that was  clear attempt at cutting out third parties, especially long time Cuomo foe, the Working Families Party… Significantly, the Commission also capped the amount Statewide candidates could receive at $7 Million. In 2018, Cuomo spent more than $30 Million.

Though the final system had to have at least acquiescence from Speaker Carl Heastie and Majority Leader Andrea Stewart-Cousins (Heastie and Stewart-Cousins appointed four members to the Governor’s two), it still drew loud rebukes from several Democratic Assembly Members and Senators in New York City. The members—many from the progressive caucus that ousted members in the Senate last year—urged the Legislature to reject the proposal or vote in a “clean” bill to replace the Commission’s recommendations next year. Some legislators have noted privately that they have two legislative sessions to amend or replace the program before it goes into effect after the 2022 election cycle.  The intra-party tension further complicates a year with several ugly Democratic primaries and a budget deficit of over $6 Billion. How that tension impacts productivity in the 2020 Legislative Session, tough races for the Legislature, we will continue to follow in the coming months. In Washington D.C., Democratic House aides spent the Thanksgiving week drafting a report that will spell out the case for impeachment based on information gathered during the House Intelligence Committee’s eight-week long hearing.   The report—which will also be released—will be used over the next couple weeks to draft Articles of Impeachment and will ultimately be the decision of the House Judiciary Committee and Speaker Pelosi.  Along with impeachment, while the triptofan wears off this week, lawmakers also

must begin the three week negotiation of the details on a final budget agreement for Fiscal Year 2020. To help negotiate a path forward, the Trump Administration is deploying Treasury Secretary Steven Mnuchin to work with House Speaker Nancy Pelosi (D., Calif.). Past Treasury Secretaries have played a role in budget negotiations but they have not typically conducted discussions over detailed spending legislation. — Jack O’Donnell

Real Estate Thought It Was Invincible in New York. It Wasn’t.

This was the year that New York bit back against big real estate.

First, a slate of Democratic candidates declared that they would not take money from real estate developers. They swept into state office last fall, displacing incumbents who were friendly to the industry. Then in February, Queens officials, bucking the mayor and governor, scuttled Amazon’s plan to open a huge headquarters there, snubbing the promise of 25,000 jobs.

In June, the new Democratic majority in Albany passed historic protections for renters, reversing decades of a Republican-controlled Senate chipping away at these laws. Real estate had for so long seemed invincible. And then, suddenly, it wasn’t...

State Sen. George Amedore will not seek re-election in 2020, the Rotterdam Republican said in a statement released Friday. 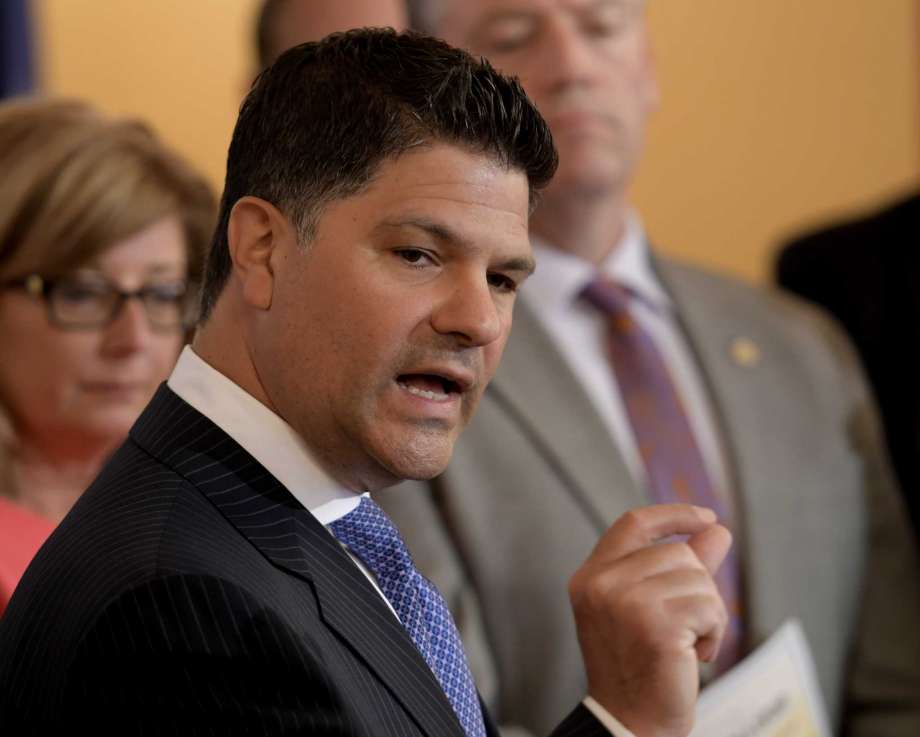 “I truly believe in public service and giving back to the community, and it has been a great honor to serve the residents of the 46th Senate District,” Amedore said. “As I have said in the past, I did not intend to be a career politician, and at this time, this is the right decision for my family and me.”

Amedore — whose district includes all of Montgomery and Greene counties, as well as part of Albany, Schenectady and Ulster — is a successful homebuilder who has been a member of the Senate since 2015.

Top Democrats’ ambitious new privacy bill has long odds of advancing in Congress. But it’s sure to spark fresh debate along partisan lines about how lawmakers should respond to tech companies’ repeated mishandling of consumer data.

The Narwhal Tusk Has a Wondrous and Mystical History

A new chapter was added on London Bridge.

For centuries Europeans sought out the

“unicorn horn” — the long and straight tusk of the arctic-dwelling narwhal whale — for its perceived magical and curative capabilities. On Friday, the tusk did indeed wield a historic force, just not in the way the queens and kings who once collected the twisted and tapered ivory likely imagined.

Instead, as the deadly knife attack unfolded on the London Bridge, a man, described in news reports as a Polish chef, grabbed the nearest arms he could find for self-defense — a narwhal tusk — and headed to help stop the melee. The simple, heroic act in a way embodied the ancient lore of the larger-than-life tusk.

whether to sign a bill legalizing electric scooters, several cities in the state are preparing to offer the devices for rental as soon as possible.

Rochester amended its agreement with the company that operates its bike-share program to allow for scooter rentals as well. It has also prepared enabling legislation, an aide to the city’s mayor, Lovely Warren, said.

Yonkers is soliciting proposals from companies that could offer the devices, and Ithaca, in the Finger Lakes, is negotiating a memorandum of understanding with scooter-sharing company Lime.

Michael Bloomberg’s entry into the 2020

presidential race on Sunday could complicate things for the next race for City Hall.

City Council Speaker Corey Johnson, who hopes to capture the 2021 Democratic nomination for mayor, was featured in a list of Bloomberg’s LGBT supporters in 2009.