Negotiations in Washington on a “COVID 4.0”  stimulus package stalled on Friday leaving leadership in Congress and the Trump Administration in a stalemate—for now—over a trillion-dollar-plus relief package. 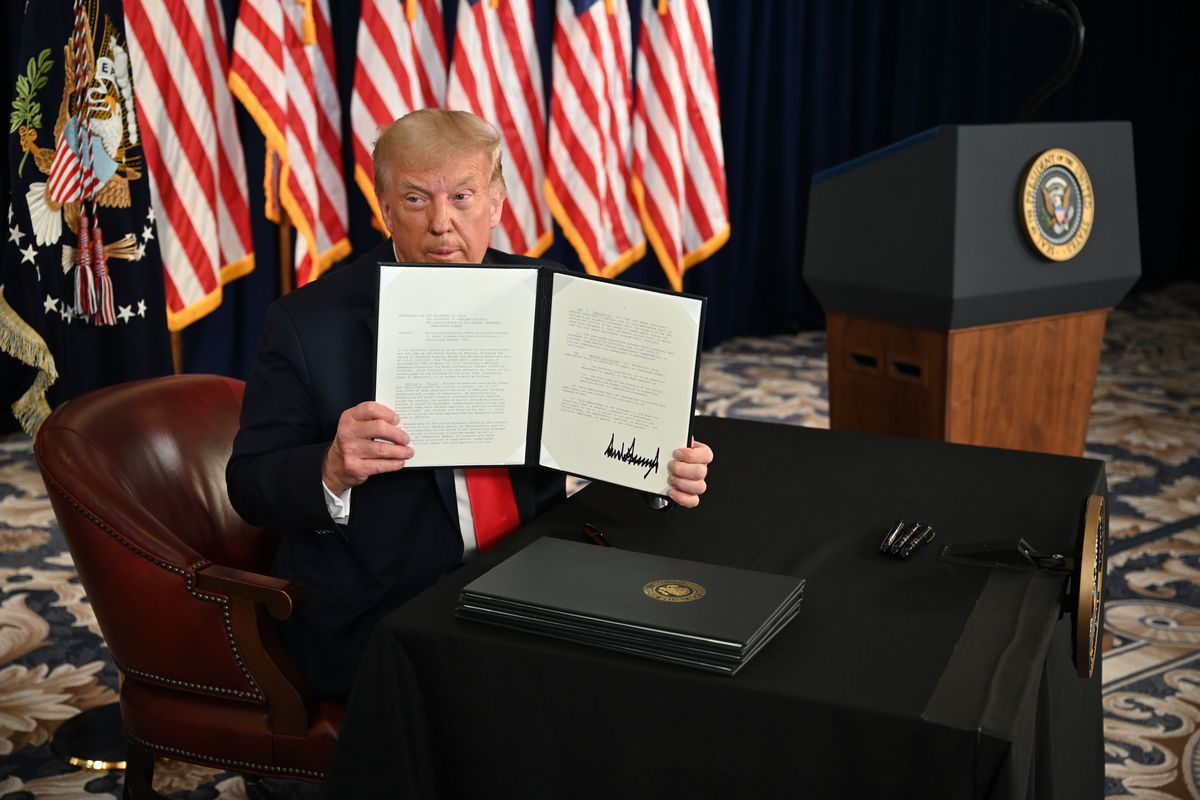 While both sides acknowledge a package is needed to help Americans amid a historic economic recession and pandemic, major differences remain in what is becoming an increasingly bitter process.

President Trump, who has been largely absent from the negotiations, stepped in Saturday and issued Executive Orders that included a federal eviction ban, student debt relief, as much as $400 a week for unemployed and a payroll tax suspension. President Trump had tried to insist that Congress include a payroll tax cut as part of the negotiations on the next package, but Democrats and Republicans rejected the idea. What was not included in Trump’s “go-it-alone” relief package was aid to cities and states, small business assistance, and aid for schools. But Democratic leaders panned Trump’s executive actions as unconstitutional and unworkable, and suggested that a close read of the texts indicates that even if they are deemed constitutional, they will not quickly deliver the aid the President promised.

What happens next is uncertain. Both the House and Senate have left Washington, with members sent 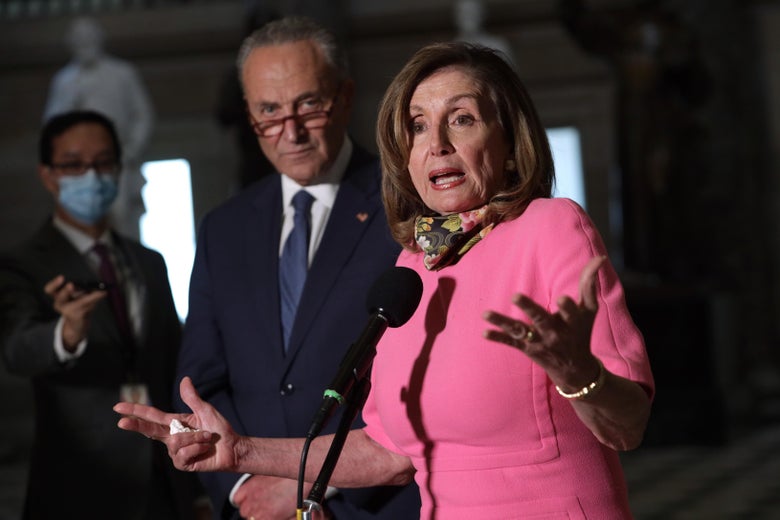 home on instructions to be ready to return for a vote on an agreement. With no deal in sight, their absence raises the possibility that discussions could stretch well into August and even September.

Speaker Pelosi’s position: “Right now we need to come to agreement. We’ve got to meet halfway. We’ve got to do what we can for the American people. But what they’re putting forth does not meet that standard.” Treasury Secretary Mnuchin, meanwhile, claimed  that Democrats are trying to “hold up the American public from getting the money they need until they get everything they want.” He said negotiators had reached agreement on everything except state and local aid and unemployment insurance benefits.

Ms. Pelosi’s hand has been strengthened by the divisions among Republicans, many of whom do not want to provide any additional aid, meaning that the White House will need broad support from Democrats to push through any stimulus plan. While Pelosi has indicated that she has had productive negotiations with Mnuchin, she is more critical of Mr. Meadows’ negotiating experience, whose reputation is built more on blowing up bipartisan deals and not constructing them. Talks have been “less efficient” than the discussions that led to the first phases of pandemic relief, she said. You can say that again…

Often an impasse in Washington is of little consequence for the public. But this time it means a longer wait and perhaps permanent expiration of a $600 per-week unemployment benefit, $100 billion on the line to help schools reopen this fall,  uncertain additional funding for virus testing, and billions of dollars to state and local governments considering furloughs and cuts to state programs.

Two weeks ago, Governor Andrew Cuomo gave a two-week warning on budget cuts to schools, hospitals, and local governments, but has not addressed the topic publicly since. His administration has remained hopeful that Congress would come together in the meantime to provide aid to state and local governments, writing again this week to New York’s Congressional Delegation: “As you consider legislation to provide financial relief to states and local governments, be advised that the minimum needed for the State of New York to cover its operating deficit while simultaneously promoting public health and safety is $30 billion over a period of two years. Failure to provide these essential funds would leave our state and every one of its communities in a precarious financial position.” Cuomo continued to lobby New York’s Congressional Delegation over the weekend calling Trump’s series of Executive Orders “laughable.”.

Cuomo did offer some clarity on Friday regarding school reopenings, but pushed many of the 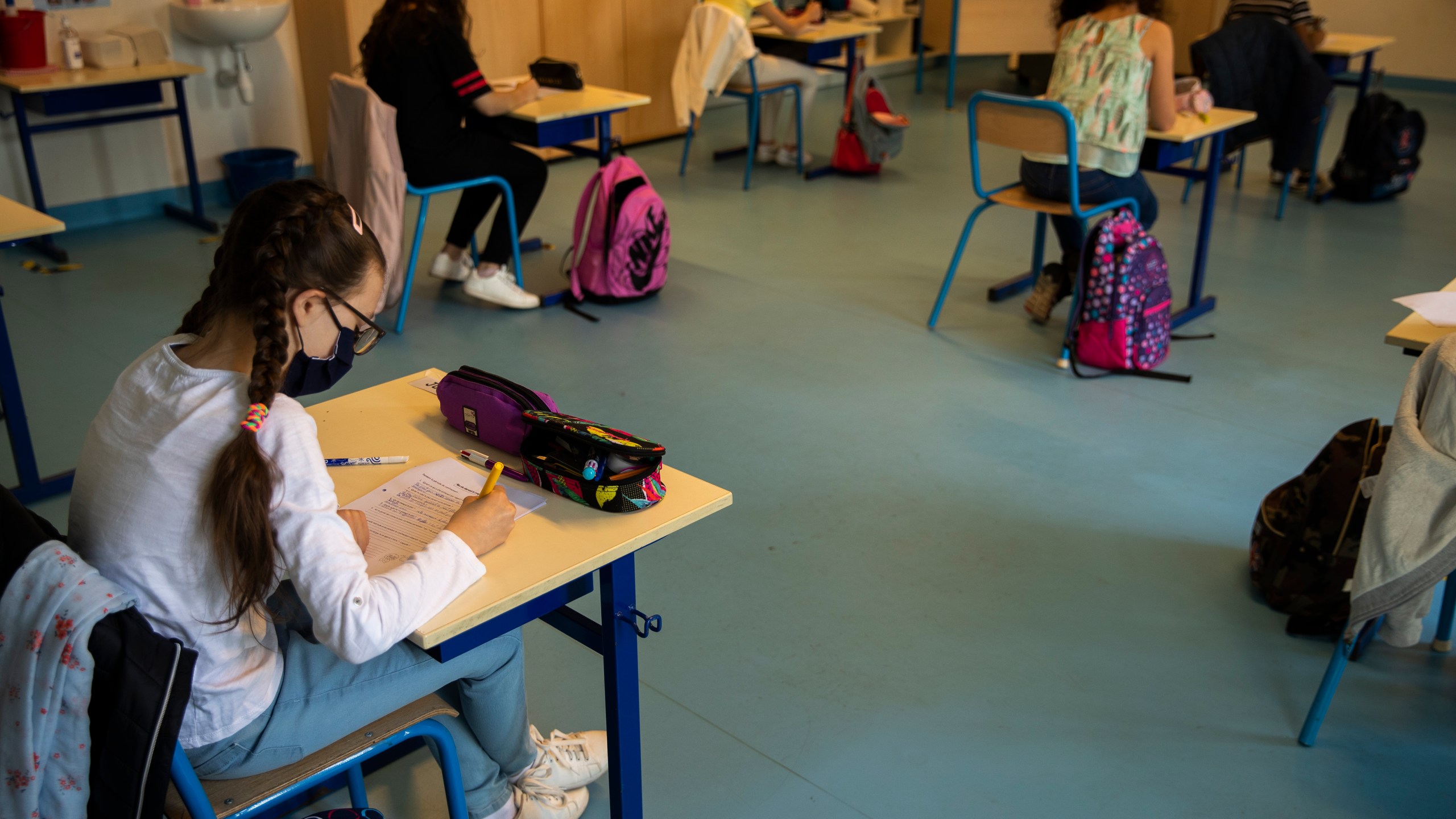 responsibilities of testing, tracing, and closing policies up to individual school districts. As of Friday, not all districts had even submitted their plans (127 of 749 were missing and 50 plans were declared incomplete or deficient). School districts are required to post their remote learning plan online for students and teachers, create a testing plan, and set up formal discussions with parents and teachers over the next few weeks.

There was also some shakeup in the Executive Chamber last week with the Cuomo Administration announcing a slew of appointments and departures in key roles, including the major posts listed below: 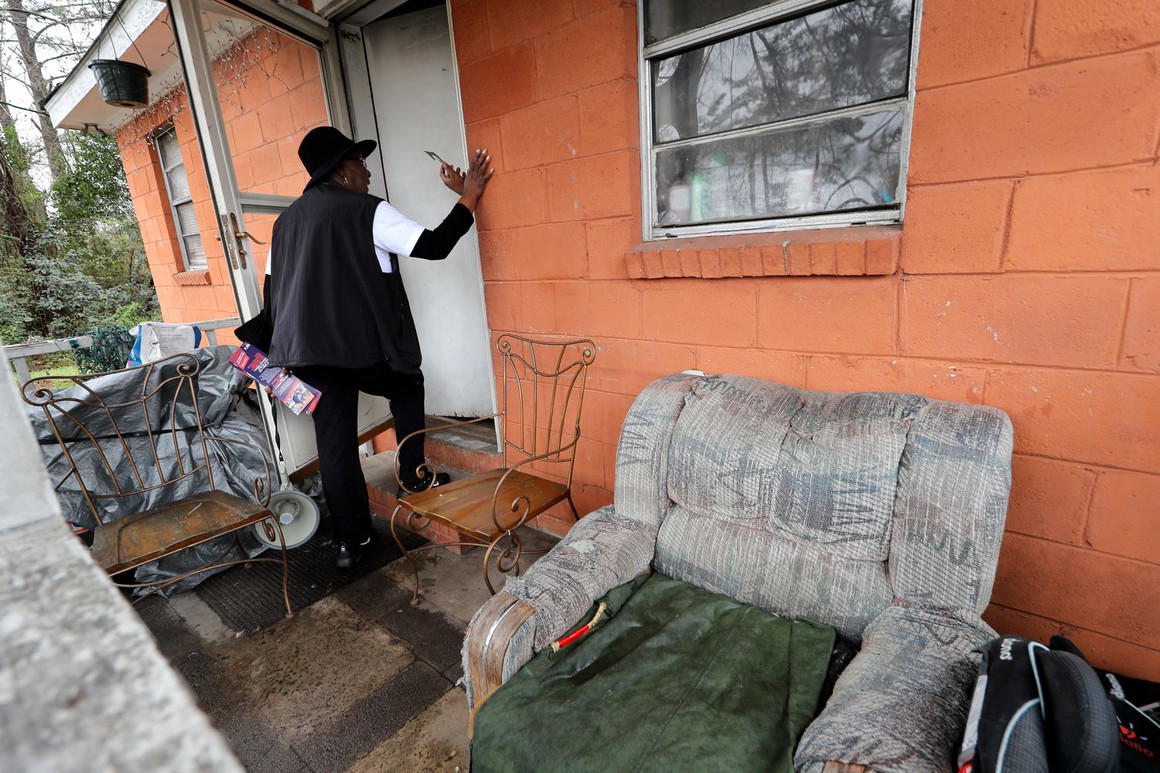 Trump’s Campaign Knocks on a Million Doors a Week. Biden’s Knocks on Zero.

The Republican and Democratic parties — from the presidential candidates on down — are taking polar opposite approaches to door-to-door canvassing this fall. The competing bets on the value of face-to-face campaigning during a pandemic has no modern precedent, making it a potential wild card in November, especially in close races. [Read more.] 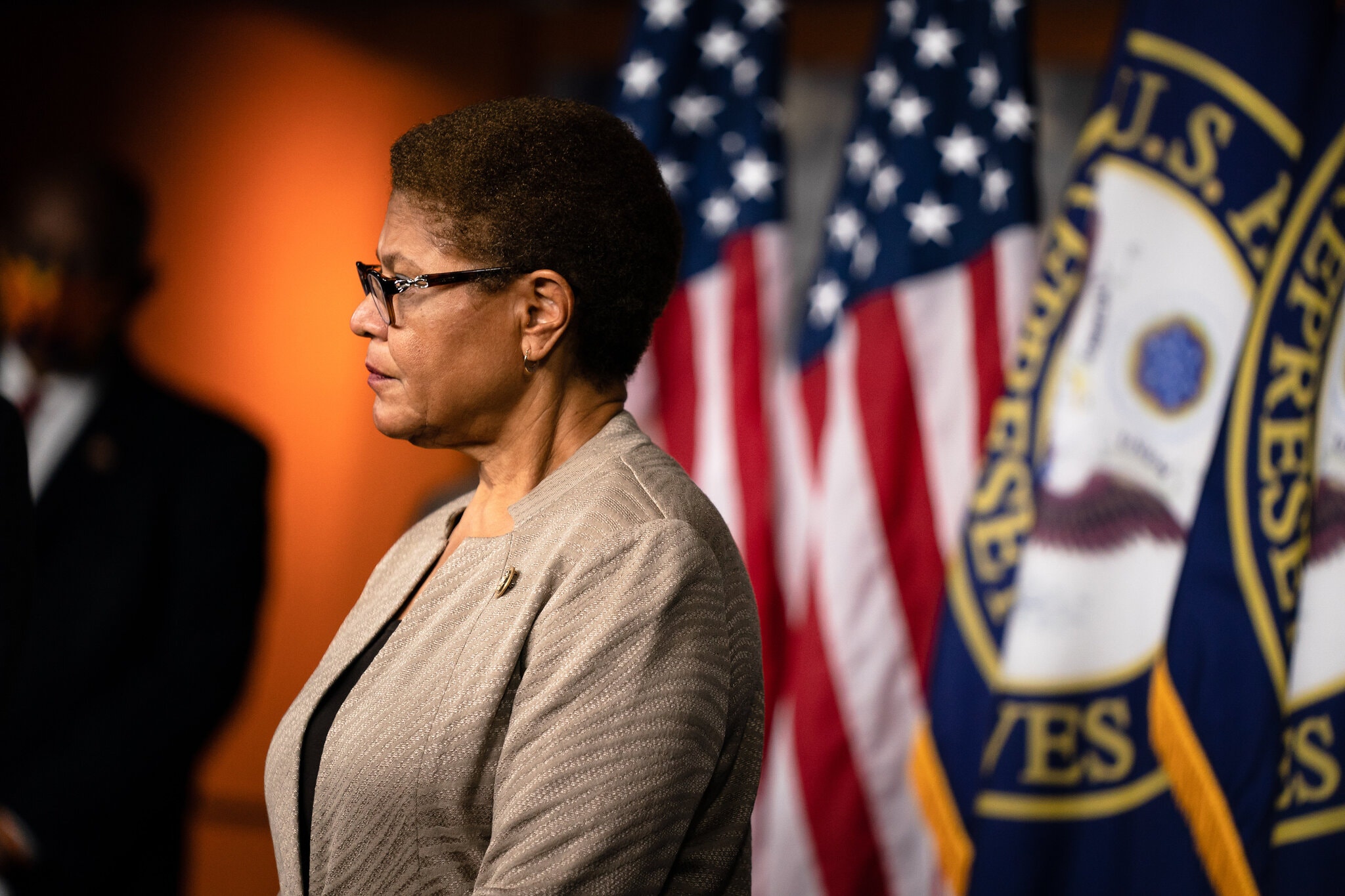 From Outsider to Insider: Karen Bass’s Unexpected Journey to Power

Today Ms. Bass, a 66-year-old congresswoman and head of the Congressional Black Caucus, is among the leading candidates being considered for vice president by Joseph R. Biden Jr. But in some ways she is still an outsider, making her way in an overwhelmingly male political culture epitomized 12 years ago by Mr. Schwarzenegger, the shoot-’em-up action movie star, and today by the power circles in Washington, where the presidency and vice presidency remain all-male redoubts. 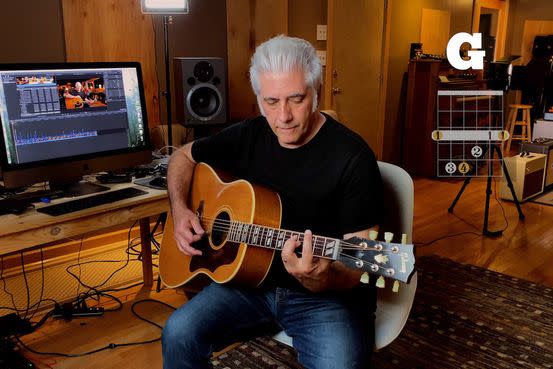 It’s Never Too Late to Start Your YouTube Career

YouTube fame has been a youngster’s game. The top earner on YouTube, according to Forbes, is Ryan Kaji, an eight-year-old who reviews toys. It’s not quite “Ripley’s Believe It or Not” that people over 50 are popular, but the emergence of older stars in a medium associated with digital-native young people is a relatively novel phenomenon, driven in part by a rising older audience. [Read more.] 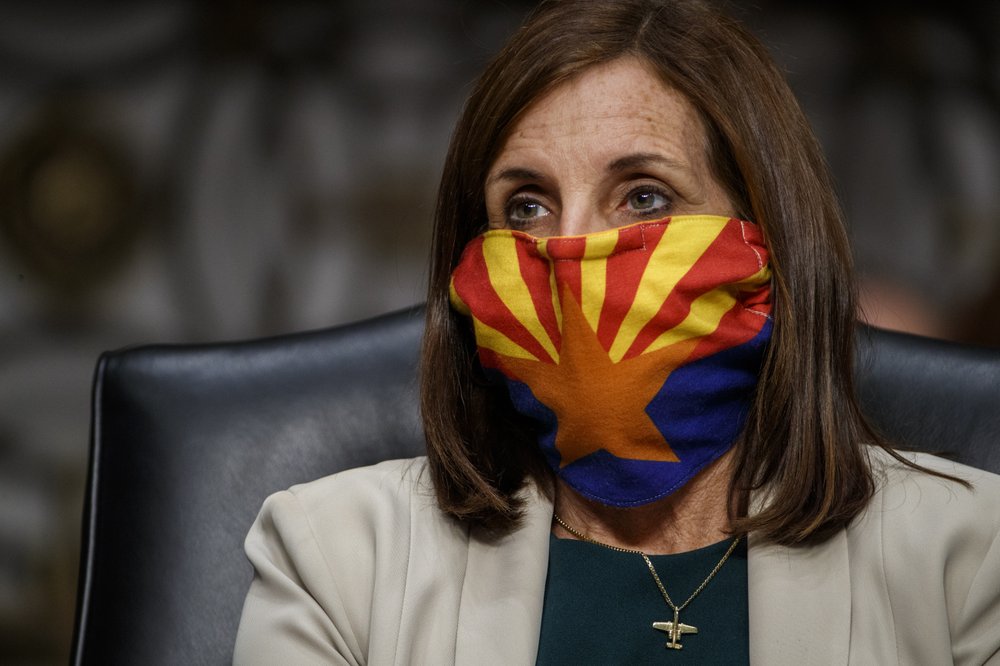 A small but singularly influential group is a driving force for an agreement on a stalled coronavirus relief bill: endangered Senate GOP incumbents who need to win this fall if Republicans are going to retain control of the majority. Confronted with a poisonous political environment, vulnerable Senate Republicans are rushing to endorse generous jobless benefits, child care grants and more than $100 billion to help schools reopen. [Read more.] 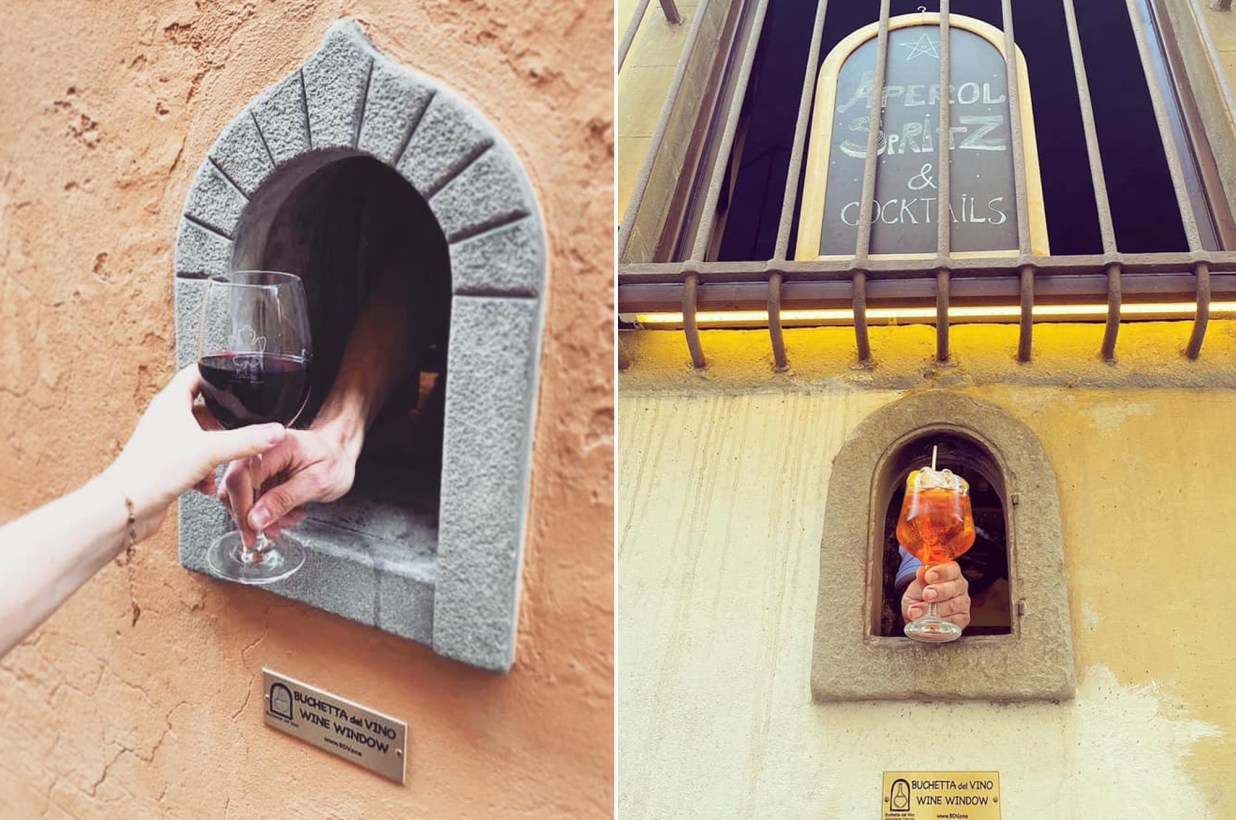 It’s a quaint tradition — with a very dark history. Centuries ago, the bubonic plague, otherwise known as the Black Death, swept through Europe, killing one-third of the continent’s population at the time. Originating in Asia, the disease made its way to Italy during the late Middle Ages, and spread north from there. These days, we know just as well as medieval Italians that a stiff drink can go a long way to ease troubles during the global coronavirus pandemic. [Read more.]