As we race towards the end of New York’s Legislative Session, two looming Supreme Court decisions are driving the final days.

New York State Rifle & Pistol Association v. Bruen is a challenge to New York’s century-old concealed handgun law. The ruling will be an indication of how this Court, with its solid conservative majority, will view state and federal governments’ ability to regulate firearms. State lawmakers are working through proposals that include broadening the statutory definition of a firearm to include weapons that have been altered, microstamping semi-automatic and automatic pistols to make them traceable, and an expansion of the existing “red-flag” law. In addition, Governor Kathy Hochul announced her support for legislation that would ban anyone younger than 21 from purchasing an AR-15 and similar weapons. With scheduled session days like sand through the hourglass, Hochul indicated she would call the legislature back into special session to get it done. Of course, the terrible shooting in Texas, before some of the dead in Buffalo had even been laid to rest, adds to that urgency. Worth noting that State Attorney General Tish James had a major victory against the gun lobby: a federal court dismissed a lawsuit seeking to prevent gun manufacturers from being held liable in civil court as a result of gun violence.

Dobbs v. Jackson Women’s Health Organization is a reproductive rights case originating in Mississippi that, according to a leaked draft penned by Justice Alito, is poised to overturn Roe v. Wade. This has prompted many states, including New York, to double down on protecting privacy and reproductive health. Immediately following the leaked draft, Governor Hochul announced $35 million for women’s health and abortion providers in the state, ​including $10 million specifically earmarked to bolster security at clinics.  This past week, lawmakers indicated support for a legislative package to assist women in New York State and those traveling to New York from surrounding states who may no longer have access to abortion clinics as a potential result of the upcoming ruling. Senator Julia Salazar and Assemblymember Cordell Cleare are working on legislation to increase the amount of grant funding that abortion providers receive. Amending the State’s constitution to guarantee the right to an abortion was first proposed by Senator Liz Krueger in 2019 and the plan has garnered significant support and attention in light of the situation at the federal level. Expect action on this before the legislature rises.

With only three days left in the legislative session, much else is dead or on life support, including, according to Governor Hochul, 421a. The property tax credit was intended to be a catalyst for affordable housing, incentivizing developers to include affordable units in their new buildings. The program has been heavily criticized for being a giveaway to developers rather than an actual solution to New York City’s skyrocketing rents and scarcity of affordable housing.

Nonetheless, the real estate community believes—with some historical examples to support them—that affordable housing projects will dry up without the subsidy. Hochul had included a modified proposal in her Executive Budget, known as 485w, that was ultimately not adopted in the final budget.

An updated list of what appears to still be alive:
NYC Issues:
In the final days of session, hundreds and possibly thousands of bills are expected to pass one or both houses. Some of the other notable bills include legislation that would establish a registration system for contractors and subcontractors performing public work in New York State; a bill to expand a key rental subsidy for individuals with HIV/AIDS to areas outside New York City; a proposal to extend prevailing wage to all renewable energy projects above one megawatt; and the Digital Right to Repair Act.
Lawmakers are also considering changing local elections to even-numbered years in an effort to align them with presidential and congressional elections to boost voter turnout. GOP State Chairman Nick Langworth reacted forcefully, declaring “[Democrats] will stop at nothing to manipulate the system to rig themselves into total and permanent power. Kathy Hochul said it herself that her mission is to ‘wipe out the Republican Party in New York’ and this outrageous legislation is a consolation prize after their illegal gerrymander was resoundingly defeated by the courts.” Senator James Skoufis—the measure’s sponsor–took to Twitter to offer “Nick Langworthy’s rumor-driven hysteria over streamlining and consolidating government – something the Republican Party purportedly endorses – resembles that of a lunatic.” Unlikely to pass but worth watching.

Of course, there was more action around redistricting— Judges in two separate cases rejected efforts to change, yet again, this year’s elections. The decisions seemingly having more to do with timing than legal merit. In a lawsuit seeking to throw out the state Assembly maps, State Supreme Court Justice Lawrence Love wrote in his decision “Petitioners have run out the clock on themselves.” The League of Women’s Voters filed a lawsuit in federal court seeking to delay all primaries until August which was also denied. All of these may receive consideration next year or, at least, before the Assembly runs again in 2024.

Finally, congratulations to new Lt. Governor Antonio Delgado who was sworn in on Wednesday in Manhattan. The Rhinebeck native served two terms in the House of Representatives before being tapped by the Governor to join her on the ticket. Delgado was joined at the ceremony by his wife and twin sons, Maxwell and Coltrane. Delgado has referred to himself as Afro-Latino and has been celebrated by many groups for being the first Latino statewide elected official however, even that was not without controversy. Fellow candidate for Lt. Governor Ana Maria Archila, was not satisfied with Delgado’s credentials, saying “I think he should say more than, I have an ancestor who once was born in Colombia.”
Of course, Delgado’s resignation from Congress made Democrat’s slim majority even smaller. There are now 220 Democrats and 208 Republicans in the House with Vice President Harris giving Democrats the tie-breaking vote in the Senate. Every Congressional seat, even in a safe blue state like New York, will be highly contested as a result of the slim majorities. With Republicans poised to make gains in November’s midterms, Democrats will now have an additional open seat to defend.
Congressman Tom Reed also resigned but, like many things in Washington, that was more difficult than it seems it should have been. Reed indicated last year that he would not run for governor following allegations of an inappropriate relationship with a lobbyist and hinted that his political career would soon be coming to end. Reed then abruptly resigned on the House Floor on May 10th, but did not submit the corresponding paperwork until this past Wednesday. That delay will mean the Special Election for the remainder of his term will take place on August 23rd–the same day as State Senate and Congressional Primaries. Representative Chris Jacobs is expected to run for the seat after his current district to the north saw some major changes during the redistricting process. Jacobs made news by offering his support for some gun safety measures.

If anyone was wondering what former Governor Andrew Cuomo is up to during this busy election season, he is feuding with 92-year-old columnist Cindy Adams. Cuomo had two aides call Adams to correct her reporting that the former Governor flew a private plane straight to Martha’s Vineyard following his brief appearance in Buffalo. He drove.

Primary season continued with the highly anticipated matchups in Georgia this past week and the continuation of the recount in Pennsylvania. Dr. Mehmet Oz, Trump’s endorsed candidate, and David McCormick are headed for a recount in the GOP Senate primary. State election law requires a recount if the candidates are within .05 percentage points of each other. The candidates are currently separated by just .01 percentage points, or 916 votes. Lt. Governor John Fetterman won the Democratic primary and, given the recount on the GOP side, should have a head start in campaigning for the general election but Fetterman is still recovering from a stroke that left him sidelined for nearly two weeks.

In Georgia, Former President Donald Trump’s status as a kingmaker in the Republican Party took a hit as his hand-selected candidate, David Perdue, was soundly defeated by incumbent Governor Brian Kemp. Georgia Secretary of State Brad Raffensberger also won his primary for reelection. Both men had been Trump’s main targets for refusing to overturn the election in their state. It was not all bad for the former President in the Peach state; GOP Senate Candidate Herschel Walker, a close ally of Trump, won his primary contest along with a handful of Trump’s endorsed candidates for the House.

In response to the latest horrendous gun attacks, the Senate voted on a motion on Thursday to proceed to debate on the Domestic Terrorism Prevention Act, which has already passed the House. Senate Majority Leader Chuck Schumer made clear to Republicans that if they wished to offer proposals of their own, this bill was the vehicle to do it. “I urge my Republican colleagues to vote to get on the bill. All we’re asking is a vote ‘Yes’ on the motion to proceed. I urge my colleague from Wisconsin to vote ‘Yes’ on that bill. If Sen. Johnson helps us get on the domestic terrorism bill, we could consider amendments related to guns, his and others that have a different point of view.” Ultimately, the measure failed without a single Republican vote.

Congress will begin ironing out defense and non-defense spending plans for FY 2023, starting with a meeting between the Chairs and Ranking Members on the Senate and House Appropriations Committees (also known as a “four corners” meeting). Citing inflation, Republicans are pushing for higher defense spending. Until an agreement is reached on that, Republicans have vowed to delay budget markups.

President Biden continued his tour of Asia this past week, offering comments on Taiwan that certainly raised some eyebrows at home and in Beijing. Biden was asked if the United States would get involved “militarily” to defend Taiwan; he responded, “yes.” While our support for Taiwan is no secret, we are not a treaty ally with them as we are with a country like Japan. If Japan was invaded, we have an obligation to defend them militarily. No such agreement exists with Taiwan which is why Biden’s comments would be a major shift in U.S. foreign policy. The President and his aides were quick to say that his comment was not a shift in policy, but rather a reiteration of our longstanding support for Taiwan.

Finally, there’s a new member of the OD&A family!

Our Vice President Jim Moore and his wife Annie announce the birth of their son Brody Nicholas Moore.

Go inside the budget process and more.
Listen as Jack gives his ten-minute take on state issues in his #FromTheLobby podcast! 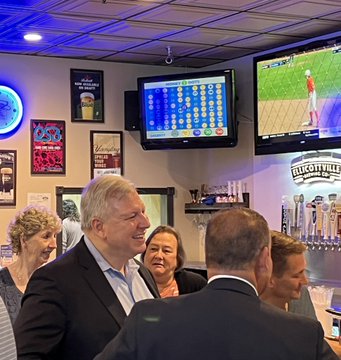 “Look, I’m a lifelong Republican. I think I’m more consistent with the Republican Party than some of my erstwhile opponents. So I think I’m going to win the nomination,” Harry Wilson said in an interview. [Read more.]

Are you keeping expired opiate pills in your cabinet?
How is this contributing to the opiate crisis?
A panel of experts joined OD&A and City & State NY for an important webinar.
ICYMI: Learn the next steps to fighting the opiate epidemic. [Watch the webinar here.]

Rochester-based Greenlight Networks has begun laying fiber optic lines and expects to connect its first area customer in late summer or early autumn. It’s starting in Clifton Park but soon will be installing infrastructure in other towns, with a goal of reaching 23,000 Capital Region households. [Read more.]