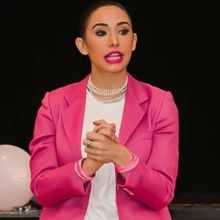 END_OF_DOCUMENT_TOKEN_TO_BE_REPLACED

Talia Rodriguez traces her commitment to public service to her grandmother, who emigrated from Puerto Rico in difficult circumstances and dedicated herself to bettering her community, a journey that led her to march with Martin Luther King Jr. and to join the March on Washington for Jobs and Freedom in 1963.

Rodriguez lives her commitment: serving on the board of the Boys and Girls Club of Buffalo, Open Buffalo, the West Side Business and Taxpayers Association, and the Western New York Peace Center.

Talia writes a regular column for all the Spanish language papers in Western and Central New York.  She created New York’s only Latina Exclusive Business Directory, which provides for the distribution of micro-funds through a crowd-raising platform.

Talia is a 5th-generation West Sider and the mother to a 5-year-old who attends Buffalo Public Schools.  She puts that view of service—and the commitment to results—to work on behalf of OD&A’s clients in order to make New York  better for all of us.