The American side of the Lewiston-Queenston Bridge was in dire need of Federal Funding. Border crossing wait times and traffic congestion were a major hindrance for economic development in the surrounding area. The main difficulty the Niagara Falls Bridge Commission had was getting lawmakers to coalesce around one solution and provide a unified front for funding even after almost a decade of work. NFBC hired OD&A to build a coalition of State and Federal lawmakers and develop an effective advocacy strategy.

The strategy for NFBC started with our team identifying a reasonable solution. NFBC—and local elected officials—had been pushing for capital funds, but the rules and scoring around capital projects would never favor this project.

Our team found an innovative solution for increased funding for an operating lease at the bridge— one that would provide higher rents from Customs and Border Patrol to the Bridge Commission which would provide additional funding to pay off bonds from the capital construction.

OD&A also weaved together support from local and state elected officials with public advocacy from local tourism boards and business groups focusing on both jobs being lost without action and the potential for job creation with the project’s completion. With the message delivered by these groups, OD&A developed NFBC’s jobs ‘hook’ to raise this issue to become a priority for elected officials.

View as a PDF

Read these additional case studies to learn problems we have helped solved, and how, for our clients throughout New York State. 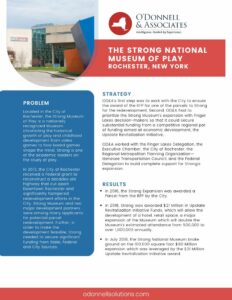 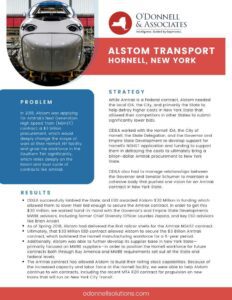 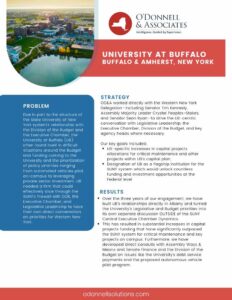